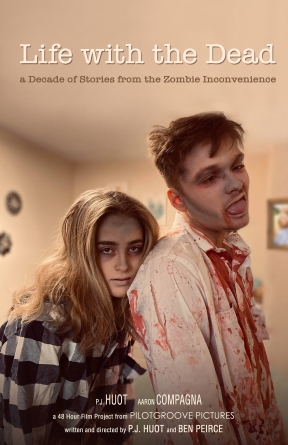 In 2011, Pilotgroove Pictures made a mockumentary short called, Just Remember That They’re Dead. The film won several awards and put our fledgling film crew on the map. Ten years later—in our 12th 48 hour film, and first sequel—we’re taking you back to the world of the Zombie Inconvenience in Life with the Dead.

It’s been 10 years since the first of the dead appeared. Zombies are accepted as a permanent and persistent part of life. Radio host-turned Zombie aficionado, Simon Wright (P.J. Huot) has fled the spotlight to a life of semi-reclusion, but documentary filmmaker, Kirk Roberts (Aaron Compagna) is determined to bring him out of hiding to host a 10-year retrospective on the Zombie Inconvenience. Will he convince Wright to rejoin the land of the living and tell the stories of life among the dead? How has life changed after a decade among the the living dead? Find out on May 15!

Life with the Dead (a Decade of Stories from the Zombie Inconvenience) was, written, shot, and edited between May 7-9, 2021, as part of the Boston 48 Hour Film Project. Writer director, Ben Peirce talked about the excitement of returning to this world.

We’ve always talked about doing a sequel. We’ve always wanted to return to the world of Just Remember that They’re Dead. Drawing mockumentary again—exactly 10 years later—felt like a sign we couldn’t ignore. There’s something special about this world we created a decade ago. The time we’ve spent there, has been some of the most fun we’ve had as filmmakers.

See Life with the Dead (and 14 other 48 hour films) at the Boston 48 Hour Film Project (Group B) screening – Saturday, May 15 at 7:00pm. Tickets can be purchased online or for $6. Ticket purchases include access to a live Q&A with filmmakers and the ability to vote for the coveted Audience Choice Award.