Fresh off its live online premiere, Pilotgroove Pictures is proud to present our newest 48 Hour Film Project – The Heroics: Return to the Hall of Heroism.

“The Heroics: Return to the Hall of Heroism” is the 11th 48 Hour Film Project from Pilotgroove Pictures. It was conceived, written, shot, and edited between August 14-16, 2020, as part of the Boston 48 Hour Film Project. It premiered with a live online screening, presented by The Somerville Theater on August 26, 2020. 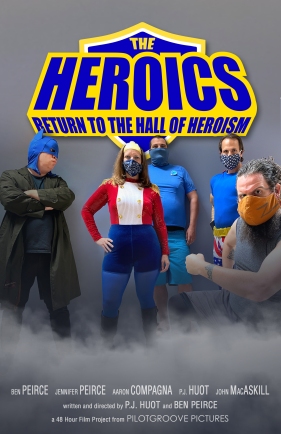 In their latest 48 Hour Film project, Pilotgroove Pictures is tackling the Superhero genre with
The Heroics: Return to the Hall of Heroism. The film will debut in a live, online screening on Aug. 26 at 7:00 PM, presented by the Somerville Theater.

The Heroics: Return to the Hall of Heroism is the 11th 48 hour film from Pilotgroove Pictures. In this satirical short, written and directed by P.J. Huot and Ben Peirce, The Heroics re-assemble to discuss heroing in a brave and bold new world. The Film stars an ensemble cast of Pilotgroove Pictures regulars, including Peirce (as Superion), Huot (Zoomer) and Aaron Compagna (Knightwatch). 2019 “Women of the 48” award-winner, Jennifer Peirce steps in-front of the camera and into the spotlight (as The Goddess) and John MacAskill dives into his first speaking role (as Gill).

In a decade, or a millennia from now, when we (hopefully) look back on this, what will the story be? Did we all die… or fall apart, and descend into chaos? Or did we get beaten back into our houses, strap on some masks, and rise back up in whatever way we knew how?

It’s easy, to be scared, and frustrated and angry, right now—our survival probably depends on us continuing to do so—but we can also be brave! I love our stupid little Superhero movie for being about that.”

See The Heroics: Return to the Hall of Heroism (and 11 other 48 hour films) at the Boston 48 Hour Film Project (Group C) screening – Wednesday, Aug 26 at 7:00pm. Tickets can be purchased online or for $5. Ticket purchases include access to a live Q&A with filmmakers and the ability to vote for the coveted Audience Choice Award.