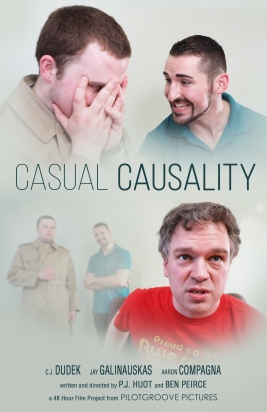 to the Boston 48 Hour Film Project, Pilotgroove Pictures will debut our ninth film – Casual Causality – on Tuesday night, 9:30pm at the Somerville Theater.

Casual Causality is a comedic time travel short, written and directed by P.J. Huot and Ben Peirce (Don is the New Death). C.J. Dudek (who made a cameo in last year’s Don is the New Death) stars as Theodore Taylor – a timid first-time time traveler who is unwittingly spotted by Ch – a jaded, time-hopper from a distant future played by Pilotgroove newcomer, Jay Galinauskas.

Aaron Compagna (Don is the New Death) returns as Ch’s Uncle Lou, a victim of his nephew’s spree of practical jokes, which threatens to derail Theodore’s time travel mission.

See Casual Causality (and 16 other 48 hour films) at the Boston 48 Hour Film Project (Group D) screening – Tuesday, June 8 at 9:30pm at the Somerville Theater. Tickets can be purchased online or at the box office for $11.

Don is the New Death  wins at DRAFT Fest